The Sharp Decline in Marijuana Prices Nationally, It is a Commodity Afterall May 10, 2018 Marijuana Business

If anyone expected marijuana prices to be stable at all, they likely had not spent much time looking at the historical prices of any commodity. In the investment world, it is a standing joke that futures contracts (publicly traded forward contract representing a set amount of a particular commodity like corn or oil) are the riskiest of investments due to their volatility. Why would marijuana prices be any different from any other commodity? 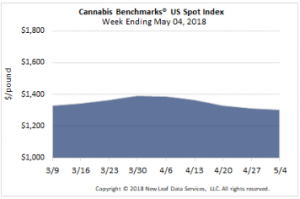 In fact, considering the cannabis market has only recently begun to squirm slowly out of the shadows of the black market, and while many of us are confident that the federal government is likely to exonerate it and free it from its banishment, we are still waiting on an official verdict and so how can we know what to expect form the price of marijuana? Considering the state of flux the cannabis market currently resides in, is it any wonder that the price of cannabis is volatile? According to the Cannabis Benchmarks U.S. Spot Index, the price of one pound of cannabis in 2016 was $1,789, but fell to $1,562 in 2017. Some states like Oregon have seen a larger decline in the price of marijuana, falling 40% from 2016 to 2017.

As of May 4th, 2018, the average price for a pound of cannabis is down to $1,303. It is a natural economic process that once demand for a product as regularly consumed as a commodity settles-in, the price of that commodity declines and analysts attempt to determine a range in the price of the commodity by analyzing supply and demand data. There is more marijuana being produced than consumers can smoke, eat or or apply topically. Less wholesale cannabis is being ordered by dispensaries and so cultivators are likely to start producing less cannabis.

There are currently 9 states that offer the sale of legal adult-use marijuana. States like Washington, Oregon and Colorado have seen enough time go by that the early enthusiasm and novelty of being able to buy legal marijuana may have begun to fade in these states. California may not take as long to determine the average price of cannabis since the illegal market has been so popular there and its close neighbors have been selling cannabis for a while. A state like Massachusetts though will likely remain unpredictable as it is the only source of legal adult-use cannabis in the entirety of the northeast for the foreseeable future. The early enthusiasm is likely to be strong when sales begin this July and it is difficult to judge the amount of tourism that may flood into the state. 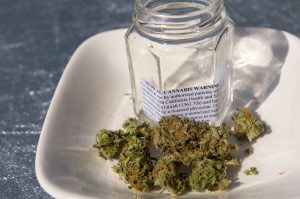 Should marijuana ever become nationally legal, the early enthusiasm will eventually fade, analysts will be able to determine what amount of the population will be regular consumers and the only real variable will be the medicinal properties of cannabis. It is a very complex plant and so as researchers break the plant down and identify what the different cannabinoid combinations are specifically capable of, demand will go up and down. When a steady range for marijuana prices is officially identified, it is likely to be a large range just like any other commodity. Although, a lot of marijuana is grown indoors which will remove weather patterns as a major variable.