There are many bills circulating Congress that would remove cannabis as a Schedule 1 substance from the Controlled Substance Act, but none has gained as much bi-partisan support as the ‘Strengthening the Tenth Amendment Through Entrusting States (STATES) Act’. The bill was introduced last week by its sponsors, D-Massachusetts Senator Elizabeth Warren and R-Colorado Senator Cory Gardner. The bipartisan sponsorship of the STATES Act is the core reason why the bill has gained the support of very influential people like President Trump and now both Nevada Governor Sandoval and Las Vegas Mayor Goodman. 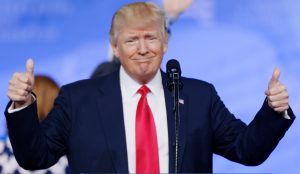 Before leaving this past weekend for the highly anticipated G7 Summit in Canada and then the meeting with the North Korean Leader Kim Jong-un in Singapore to discuss denuclearizing, President Trump told reporters concerning the STATES Act, “We’re looking at it. But I probably will end up supporting that, yes.” It is the strongest statement yet made by the president in support of the national legalization of cannabis. While on the campaign trail President Trump stated that he supported states’ rights to decide on cannabis legalization, but after taking office he appointed Jeff Sessions, one of cannabis legalization’s largest opponents, as attorney general.

Earlier this year the AG rescinded the Cole Memo which had advised U.S. attorneys around the country not to prosecute state legal cannabis businesses or consumers. While few U.S. attorney have taken any sort of action against cannabis companies, the move to rescind the guidance still shook the cannabis industry. “All of a sudden, funding freezes up and employment freezes up. Everything in the industry starts seizing as it would in any industry,” said John Mueller the CEO of the Las Vegas dispensary, Acres Cannabis.

Beyond the Cole Memo, the only other major piece of legislation that does anything to protect cannabis companies and consumers is the Rohrabacher-Blumenauer Amendment which strips funding from the Justice Department to pursue medical marijuana programs. Both of these efforts on the federal level are most likely the main catalysts that gave states like Colorado, Washington and Nevada the confidence to legalize adult-use cannabis in the first place. The roll back of the Cole Memo and many close calls with the Rohrabacher-Blumenauer Amendment made clear that they are not sufficient to protect states’ rights to legalize cannabis. Bills like the Marijuana Justice Act and the MEDS Act do not seem to have enough bi-partisan support to have a real chance for passage, but the STATES Act may have what it takes. 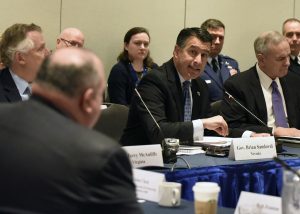 Nevada’s own Governor Brian Sandoval, who initially opposed the legalization of cannabis in Nevada, has joined with 11 other governors in support of the STATES Act. The group of 12 governors throwing their support behind the STATES Act wrote a bi-partisan letter that stated, “Our Citizens have spoken, we are responding.” Governor Sandoval is joined by the Las Vegas Mayor Carolyn Goodman who is working jointly with five other mayors to push for the STATES Act as well. The momentum seems to be with the new bill and the bi-partisan support may be a large part of it. The president’s unhappiness with AG Jeff Sessions, along with a conversation between he and Sen. Gardner this year that resulted in the senator removing a blockade on justice department nominees he had put in place due to the rollback of the Cole Memo, may have something to do with President Trump’s support of the new bill as well.