Nearly a Year Into Commercial Cannabis Sales, 41 Cited for Public Consumption in Las Vgas May 16, 2018 News

Getting in trouble for the public consumption of marijuana is probably the biggest worry for Las Vegas tourists coming into town to indulge in the newly legalized adult-use cannabis market. Las Vegas dispensaries seem to be on every corner and some really remarkable cannabis stores are located right next to the strip. Since legal commercial sales of recreational marijuana began last July, the city is generating around $35 million a month in sales. The only real question for cannabis enthusiasts is where to smoke their weed.

Social consumption lounges have been banned for the time being and both state legislators and casino owners have decided the smart and safe route for now is not to allow marijuana and gambling to intermingle at all. The only place to consume marijuana legally is on a private residence, and many tourists coming into town are not their to visit family or friends that live in town. So, many people are just taking the chance and going the public consumption route. So far, the Las Vegas metropolitan police have cited around 41 people for public consumption in what has been nearly a year. 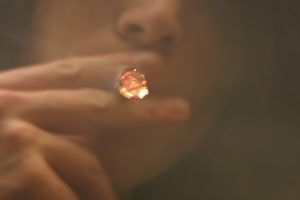 Nevada State Sen. Tick Segerblom said he sees the number of citations issued as a sign that law enforcement is looking the other way when it comes to enforcement.

“We need to have places where people can use it socially,” said Segerblom.

There are plenty of people still coming to Las Vegas with no interest in the marijuana industry, they are the same people that have been coming to Las Vegas and spending their money for many years. Casinos and their hotels do not want to risk their bread and butter by allowing the smell of cannabis to permeate their resorts. Marijuana can have a strong odor, especially when smoked, that some compare to the smell of a skunk from the myriad of terpenes that can be found in the plants.

“People do not want to spend $300 for a hotel room at one of our nice properties and then smell marijuana oozing out of their rooms,” Pat Hickey told News 3 in 2016.

The creation and permission of separate establishments for the specific purpose of social consumption will not prevent anyone from ever smoking marijuana out in public. They will likely though be utilized and slow the use of marijuana publicly and could add an extra draw to Las Vegas. It could be argued that the draw to Amsterdam in The Netherlands has more to do with their famous cafes than the simple allowed use of cannabis. Whether these establishments would be able to sell marijuana along with allowing patrons to consume cannabis is another questions legislators will have to address. In the meantime, the apparent tolerance of the Las Vegas metropolitan police is allowing the Las Vegas marijuana industry to flourish as sales are beating any other city that has legalized cannabis thus far. Would the existence of public consumption lounges for marijuana make visiting Las Vegas even more appealing than it is now?