Today marks the 2-year anniversary for recreational marijuana sales in Nevada. If it feels like the time has flown by, that’s because so very much has happened in the last two years. I think it is safe to say that if Vegas needed any revitalization, legal weed has done just that. Sales for cannabis are beating all expectations and the industry continues to flourish. Lab tested marijuana in Las Vegas is as high of a quality as can be found in the world, and people know it.

Let’s go over a little of what has happened in the last two years. From a declared state-of-emergency, the opening of the largest marijuana dispensary in the world, nearly getting social consumption lounges and further marijuana law reform, Nevada is setting the tone for the rest of the country’s cannabis industry. There are still some safety questions that need to be addressed as well. Like everything else in life, there is some bad mixed in with the good.

When the commercial sale of adult-use cannabis started on July 1st 2017, it took our former Governor Sandoval declaring a state-of-emergency to get it done. At the time there was a battle between alcohol distributors and independent third parties that were both interested in transporting cannabis from the grow houses to the dispensary. While the state-of-emergency accomplished getting weed on the road, there was still a bottleneck and dispensaries found themselves frequently without product in the beginning.

After that though, everything began to smooth out and Las Vegas became the epicenter of cannabis for the United States. Sales consistently grew month-over-month, the cabs started getting plastered with dispensary ads and disposal bins were placed around McCarran International for all the tourists that had overbought and had to get rid of their weed before going through airport security. More and more cultivators and dispensaries received licenses and so the amount of dispensaries surrounding the Strip continued to grow.

We seemed very close to getting marijuana lounges in Las Vegas too. Dispensaries starting adding separate sections for social consumption in anticipation for the solution Nevada still needs. It would have been great so that tourists did not have to break the law every time they came to town to consume cannabis. But, casinos don’t want it in their hotels and most tourists don’t know the locals to go hangout with them for a while. Lounges are something to look forward to in 2020 hopefully.

After Governor Sandoval was replaced by Governor Sisolak, we saw even more marijuana law reform come to Nevads. Many records are being sealed for people with past possession convictions and more medical conditions including opioid addiction qualify for medical marijuana cards. The biggest change though came when Governor Sisolak enacted a law that prohibits most employers in Nevada from testing job applicants for THC. It’s a first of its kind here in the United States and everyone will be watching to see how it plays out.

Analysts are paying close attention to Nevada to see the consequences of broad marijuana reform. People want to know if it is going to increase cannabis consumption for adults and in our youth. They want to know if it will slow opioid addiction death rates or increase them. They also want to know if more people will drive under the influence of cannabis or if crime will go up. =

“It’s difficult to determine trends over just two years,” said Andrew Bennett of the Nevada Department of Public Safety’s Office of Traffic Safety. “Having quality data is vital to determining how to best address any problems. We expect to have several conversations and studies during this interim session around this topic.”

According to the Nevada Department of Public Safety, crime has gone down in Nevada over the last 2 years. There were a total of 91,097 incidents of crime in 2018 which is the lowest it has been in the last 8 years. In the beginning fatal car wrecks where cannabis was involved went up in Clark County, but since then the number of fatalities has come down. It is not enough data to make any strong determinations and also testing someone for being under the influence of THC is challenging to say the least. 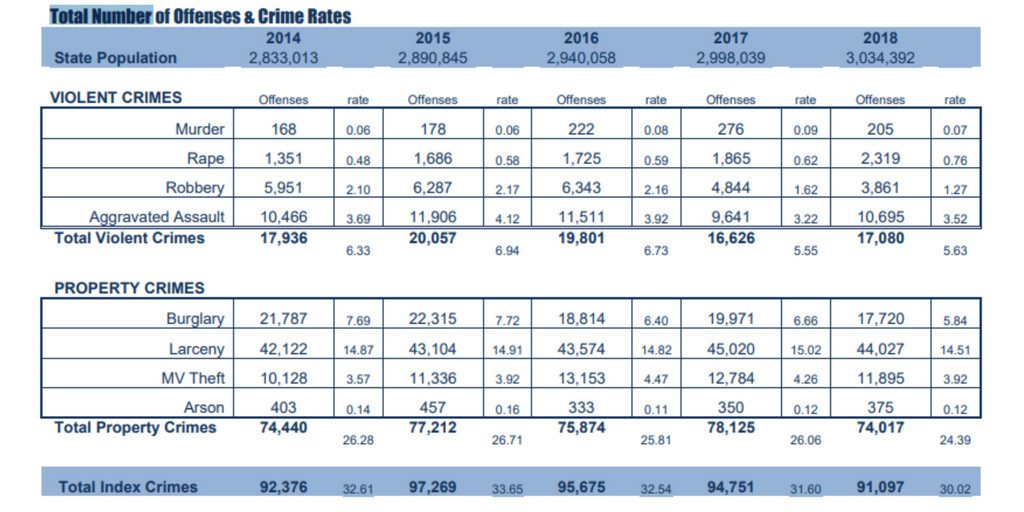 From the Nevada Department of Public Safety

All-in-all, you would have to say that the last 2 years of commercial cannabis sales has been a success. Everyone thought that when California legalized the commercial sale of cannabis in 2018, that Los Angeles would become the spot. But, California has a lot more problems to contend with considering illegal cannabis is so readily available still and their population is huge.

Keep your eyes open for some deals here on the 2-year anniversary of recreational marijuana sales in Nevada. The 4th of July is on Thursday as well so there should be a lot of opportunity to save on your cannabis. Everyone should continue to stay safe so that way we can look forward to another tremendous year for Las Vegas, Clark County and the rest of Nevada. Cannabis consumption lounges are likely to change the landscape even more, but we will have to wait a little longer on that.

Keep looking for those certificates of analysis. It’s the only way to make sure that your cannabis is safe to consume. We will keep up the marijuana lab testing in Nevada and make sure that Las Vegas remains the gold standard for the cannabis industry and keep those tourists pouring in.