Recently, Caesars Palace announced it would no longer be drug testing employees for marijuana consumption unless it is for federally regulated transportation jobs or managers think employees are high at work. The rationale for the change in policy about cannabis drug testing was a need for quality employees and to be on board with Nevada’s new laws concerning recreational marijuana consumption. Many expected that other casinos would also be following Caesars’ example but they are slow to make the transition.

Some of the casinos simply do not want to commit to any sort of policy change as of yet, while others like Wynn Resorts Ltd. are sticking with the same drug testing policies they have been using and show no sign of any leniency towards cannabis consumption. According to Quest Diagnostics and its senior director of science and technology, Barry Sample, the amount of people testing positive for THCA is increasing, especially in states that have legalized marijuana like Nevada. It is making finding qualified employees that are not testing positive for cannabis difficult for many employers.

“These increases are similar to the increases we observed after recreational marijuana-use statues were passed in Washington and Colorado,” Sample said. “While it is too early to tell if this is a trend, our data suggests that the recreational use of marijuana is spilling into the workforce, including among individuals most responsible for keeping our communities safe. We encourage policy analysts to track these trends closely to determine whether a correlation between the state legalization of marijuana and increased workforce drug use, as suggested by our data, bears out in other research.” 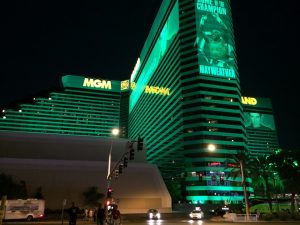 “Nevada law concerning marijuana has complex implications for employers in highly regulated industries like ours,” an MGM representative said Tuesday. “MGM Resorts has carefully reviewed its policies and work rules and has made adjustments as appropriate.”

Marijuana legalization for many people and companies is both a controversial and challenging issue. Advocates will argue that if an employee can drink alcohol during non-work hours, then why should they not be able to smoke marijuana in a state that has legalized it. But, for employers that are seeing Las Vegas dispensaries sprouting up around them, it seems to be a bit more of a complicated issue. Many brands around the country are not interested in being associated with cannabis anymore than they want to be associated with alcohol, but announcing they are no longer testing for cannabis may mean that people assume it is a cannabis friendly organization. Employers are interested in a productive and safe work environment and cannabis may not represent either one of those things, especially if employees are coming to work high.

Even if marijuana was removed from the Substance Abuse Act and descheduled federally, many employers may still want to test employees and applicants for marijuana. Stigmas associated with alcohol consumption still exist despite it being legal nationally, so how could we not expect that a bias against marijuana will remain regardless of what state or the federal government make legal?