Harvard University scientists with the Dana-Farber Cancer Institute recently discovered that one of the many biological compounds found in cannabis, a flavanoid or cannaflavin called FBL-03G, showed remarkable results in treating pancreatic cancer. The study, published in the Frontiers of Oncology in July, found that not only did FBL-03G kill pancreatic cancer cells but also attacked and killed other cancer cells. One of the study’s researchers and an assistant professor at Harvard, Dr. Wilfred Ngwa, spoke with Yahoo Lifestyle about the findings.

Ngwa says that the study is the first to demonstrate the potential new treatment for pancreatic cancer. But on top of successfully killing those cells, the scientist found FBL-03G capable of attacking other cancer cells — which was startling even to them. “We were quite surprised that the drug could inhibit the growth of cancer cells in other parts of the body, representing metastasis, that were not targeted by the treatment,” says Ngwa. “This suggests that the immune system is involved as well, and we are currently investigating this mechanism.”

Many cannabis legalization advocates have argued that cannabis has properties capable of helping in the treatment of cancer, but the limited amount of research has done little to verify those testimonies. Flavanoids are common in plants, being one of the main compounds that give flowers and fruits their coloring. Cannaflavins, as flavanoids found in cannabis are often called, are what give cannabis flowers their color if you have ever seen the purple tint in certain cannabis cultivars before. However, they only makeup .14% of the cannabis plant which forced researchers to genetically engineer cannaflavins like FBL-03G, so that they could reasonably study the potential medical benefits of cannaflavins. 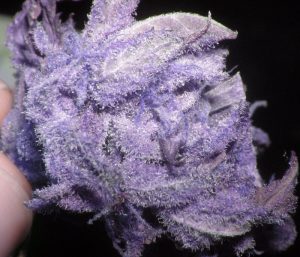 While pancreatic cancer only makes up about 3% of cancers in the U.S., it is predicted to be the second leading cause of cancer deaths by 2020. Only 20% of people diagnosed with pancreatic cancer survive one year, and 8% survive five years. Needless to say, research like this is much needed and Dr. Ngwa is hopeful that clinical trials will be completed by the end of 2020 and then testing on human subjects can then begin.

There are over 200 biological compounds found in the cannabis plants. One of the biggest focuses of the Nevada cannabis lab testing done here at Digipath Labs is to collect data from the myriad of samples received. While most discussions surrounding cannabis focus on the plant’s phytocannabinoids and terpenes, cannaflavins also play a major role in how consumers perceive cannabis. Cannaflanins not only contribute to the beautiful coloration of many cannabis flowers, but also with their smell working synergistically with terpenes.

Dr. Mechoulam, the so-called father of cannabis science, often referred to the entourage effect in his work. The entourage effect is the synergistic workings of all the biological compounds found in cannabis including cannabinoids, terpenes and flavanoids. While researchers continue to isolate these compounds to see what they are are capable of doing individually, we have to wonder when they begin to truly understand how these compounds work together. If cannaflavins like FBL-03G are able to kill cancer cells by themselves, then will they be even more effective if they are combined with other compounds found in the cannabis plant?