For a long time Las Vegas has been a very popular New Year’s Eve destination with its luxury hotels, casinos and legendary nightlife. It is a place where the rich, glamorous and the everyday person alike come to indulge on the best that life has to offer. Now that adult-use marijuana is legal in Las Vegas, visitors have even more reasons to come and celebrate the end of a year, and the beginning of a new year. One of the many standout moments of this New Year was the sale of the most expensive marijuana in history. Multiple gold coated Leira Cannagars sold for $11,000 each.

A cannagar is exactly what it sounds like, a cigar full of marijuana. There are a number of companies producing cannagars full of lab tested marijuana, but one particular company out of Washington, Leira, is the creator of this particular marijuana product. The $11,000 cigar is filled with 24 grams of lab tested marijuana and wrapped in a 24 karat gold hemp leaf. A businessman from southern California unwrapped a number of stacks of cash to make the indulgent purchases and celebrate the coming of 2019.

“I’ve always been a proponent of the industry and I’m happy that it has come this far,” Hawkins, who owns The Hudson restaurant in West Hollywood, told the Sun. He added that the co-founder of the Las Vegas weed grower Virtue arranged the purchase several months ago. 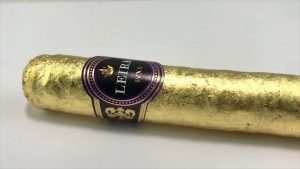 The most expensive single, legal pot product to date was sold to the Los Angeles businessmen at the Nuwu Cannabis Marketplace — a giant mega-dispensary owned by the Las Vegas Paiutes on tribal land close to downtown Las Vegas. Shepherd told the Sun he was glad the indigenous Paiutes owners are pushing the legal weed industry forward. One of the Las Vegas Paiutes council members and former chairman said he hopes “this is what marijuana table service will look like in Las Vegas.”

“They’re pushing the boundaries on the industry and creating economic impact,” Shepherd said. “These are all minorities coming forth to change the stigma of the industry.”

2019 looks to be even more promising for the Nevada marijuana industry as a number of political leaders are pushing for marijuana lounges to open up along the Las Vegas strip. With a place to legally consume marijuana and indulge the fascination of an Amsterdam like setting, tourists will have yet another reason to come and visit Las Vegas dispensaries. As of now, tourists have few choices for where they can legally consume cannabis. As always, Las Vegas never fails to provide the very best that New Year’s Eve and other celebrations has to offer.